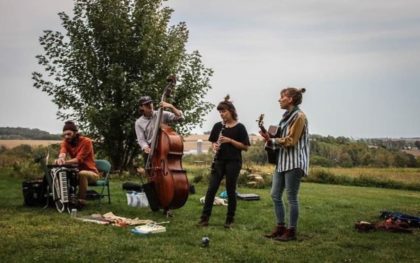 Humbird (Siri Undlin) is a Minneapolis based singer-songwriter, poet, and storyteller inspired by the crystalline chill of her home state’s northern winters. Undlin twines experimental folk, environmental Americana, and orchestral compositions to forge an explorative embodiment of the narrative folk song and balladry tradition. Released in September 2019, her debut full length album, Pharmakon, engineered by Brian Joseph (Bon Iver, Sufjan Stevens) and produced by Shane Leonard (Field Report), has been received with remarkable critical acclaim and has amassed nearly 20 million streams since its release. Folk Alley listed “Pharmakon” as one of their favorite songs of 2019 and at the end of week one, the album ranked #19 on the top NACC music charts and by week two was at #1 on the Folk charts – one of only two self-released albums to chart. Most recently she won the 2021 Kerrville Folk Festival’s song-writing competition was able to perform a set at the 49th annual festival this fall. Fall 2021 will be peppered with regional Midwest dates and a release of Humbird’s third studio album, Still Life.

A Humbird live performance is intimate and earthy, literal and metaphorical. The band nimbly prances around the lilt of Undlin’s unfaltering fervent and haunting voice – the focal point. Although the songs and stories hold their own, the embellishments the band supply add the perfect splash of timbre and color to deliver a dynamic and engaging performance.

Humbird performs solo and as a trio (drums/percussion and double bass/electric bass).